Hi everyone, happy you have stopped by.
Wed morn and I haven't written a thing yet, normally I write my blog like a diary adding photo's and comments throughout the week but this week although I did take some photo's never found the time to sit down and write.
I have had company in my sewing room this week, not the cat which we haven't got, or the dog which we do have, she would literally eat every fabric she could get her paws on but my DH who has decided it is time for some sewing of his own. 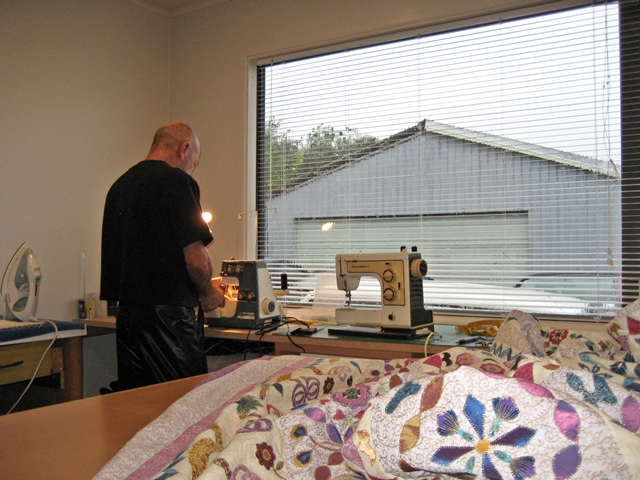 While I am at my machine Steve is set up on the cutting bench under the window with his trusty old machine and not so trustworthy overlocker. It has been fun to have company.

Not a lot to show with my LE, I have been quilting some of each day working my way through the borders, and from the right side there is little to see as I am only edge stitching the main elements.
Yesterday I put LE on our bed to see how it looked and was amazed that it was the perfect size. 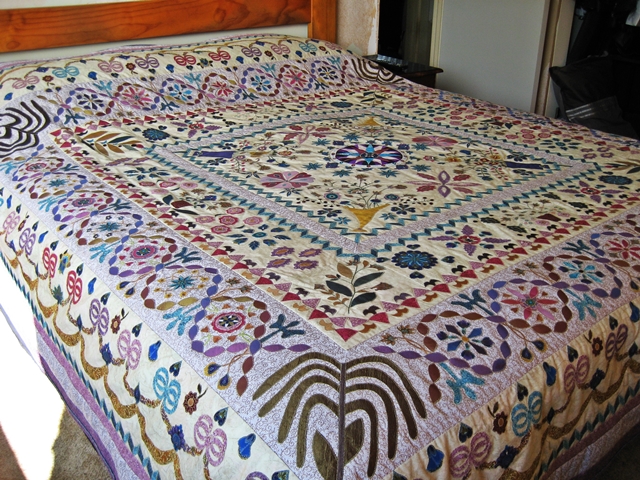 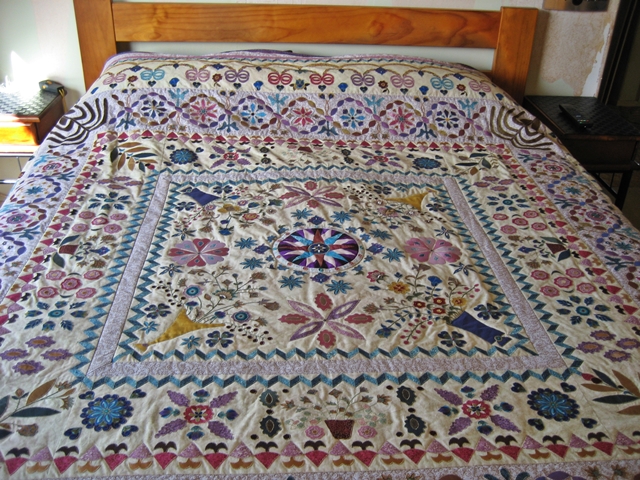 Have to say it looked good 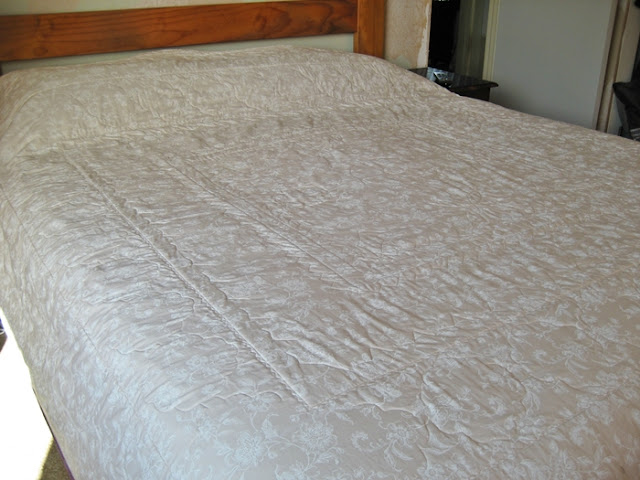 Even looks good this side up.
A few ripples in the backing fabric but no tucks or pleats which I am so happy about.
My method of just pinning each border at a time has worked for me.
Still have more to do as I am stitching whichever border takes my fancy at the time just making sure I do all four sides before moving on.

While stitching my mind kept straying to Hearts Desire, the first BOM I made after joining Esther's at that time yahoo group. This year is the fifth anniversary of the devasting Christchurch earthquake which killed 185 people and I have decided it is time for my remembrance quilt to be finished.
Five years ago I had fundraising plans for this quilt but for several reasons they did not eventuate and it has been sitting waiting to be finished. 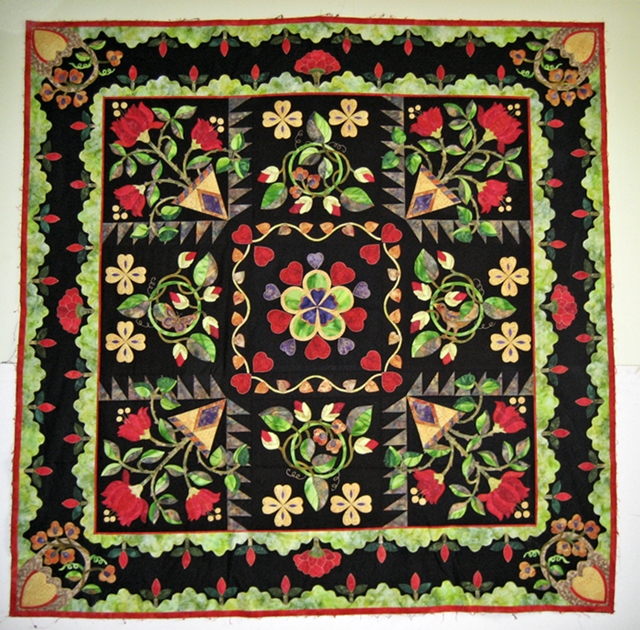 Christchurch - My Hearts Desire in 2011
I love this pattern and although I changed a couple of the center elements it is still very much Esther's pattern and is still available on her website.
Looking at it now I decided it needs the "candles" in my outer border to be lit and that it did need another border but not the one in the pattern. How lucky it is that I tidied my sewing room a few weeks ago, I went straight to my neatly sorted bags of scraps and found what I needed. 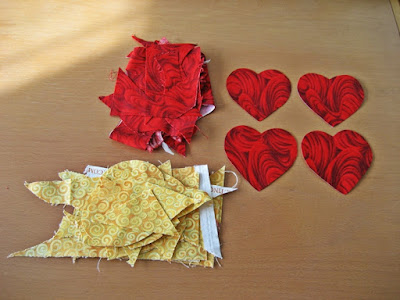 The yellow for my flames and enough of the patterned red from my center for four corner hearts in the next border. Doesn't pay to throw any scraps out. 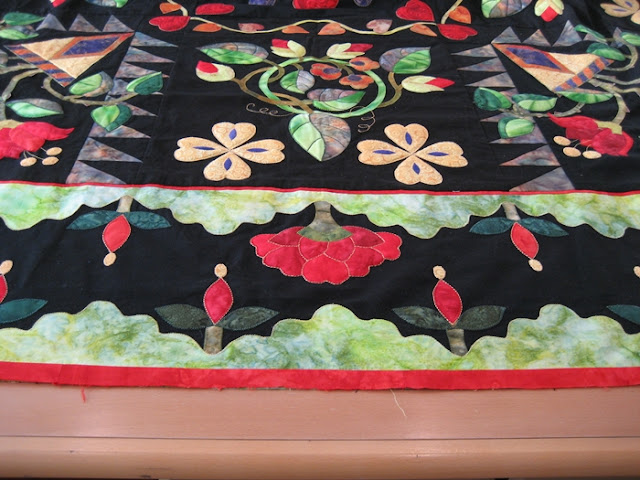 Esther has little circles either side of the bud by the leaves but for me my oval tops work as everlasting flames and I think of this border as "Candles in the Park"
I had also found the length of black fabric put aside for the binding. It was wide enough to cut four
3 1/4 inch border strips from. This was a blessing as my background is such a black black that I had looked for ages to get a match when I had needed more fabric . 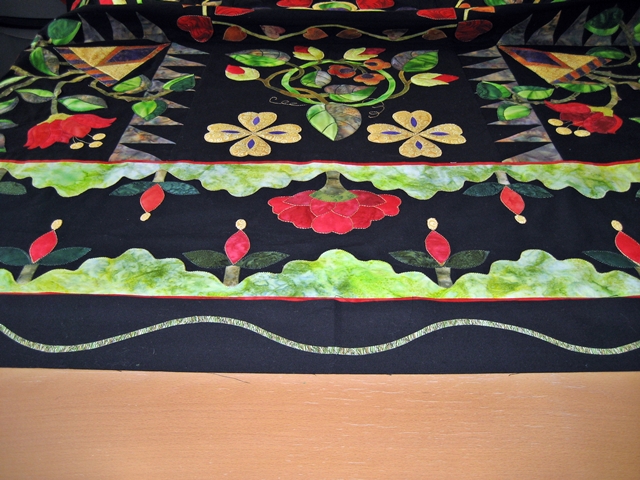 Start of my final border.
I played with Esther's border pattern for ages and it just wouldn't gel for me in the context of my quilt then looking at my ties that bind border I put around the center it all fell into place. Drafted a new curved stem and will replicate my inner border. Have counted up and only need to stitch 72 hearts, after the zigzags on LE that should be a breeze.

So that is where my week has taken me, now linking with Esther's Work on Wednesday and back to my sewing room, it is pouring down outside afterall.
Cheers Jenny
Posted by Jenny at 09:48