Don't seem to find the time to sit at the computer at present so once again a few weeks since I have blogged, this week its catch up time.
Luv Shack is finished, Yay I am over hearts for the time being. Kept my quilting really simple as wanted this throw to stay soft and cuddly, had planned on only stitching around the hearts but once that was done it did need something else. 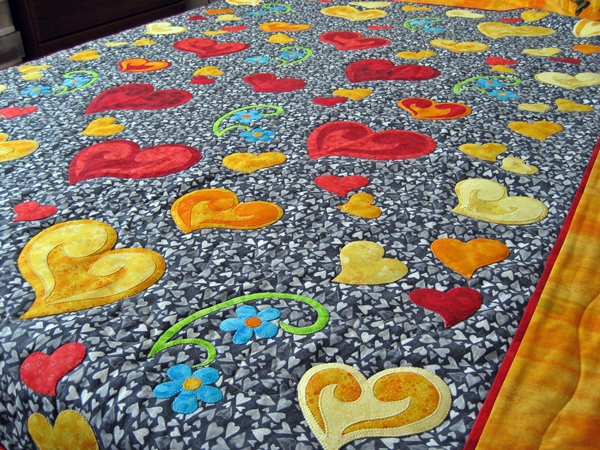 Doesn't really show up but I used metallic gold thread  and stitched different sized  hearts in all the open areas, they catch the light and lift the background a little. My hand eye cordination is not great so made freezer paper templates to make sure I got regular shapes and it worked well. 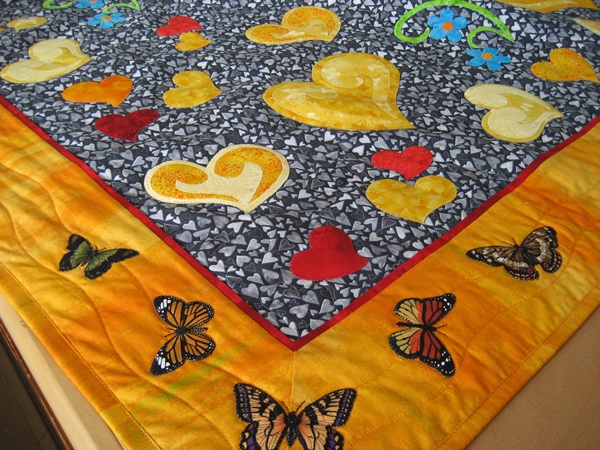 Borders got twin wavy lines sort of peplicating the flight of the butterflies. 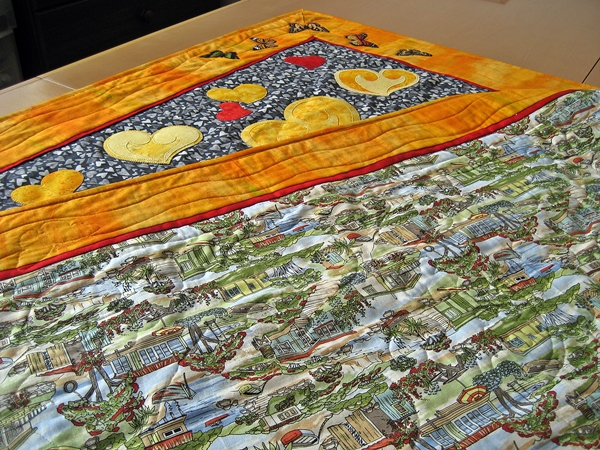 Very happy with how the reverse turned out.

First time I have made a quilt reversible and it worked out great, Used matching orange thread top and bottom for my border stitching so shadow butterflies that just blend right in. My only concern was with making the center of the back larger than the front my butterfly stitching does go onto the red strip but it is only some of them  and its balanced all around so looks fine.
Now to get it to my friend and find out if she likes it.

Diamond Hill is completly up to date as have been taking my outer border strips to the Thursday group and stitching them there so am all set for tomorrow and part six. 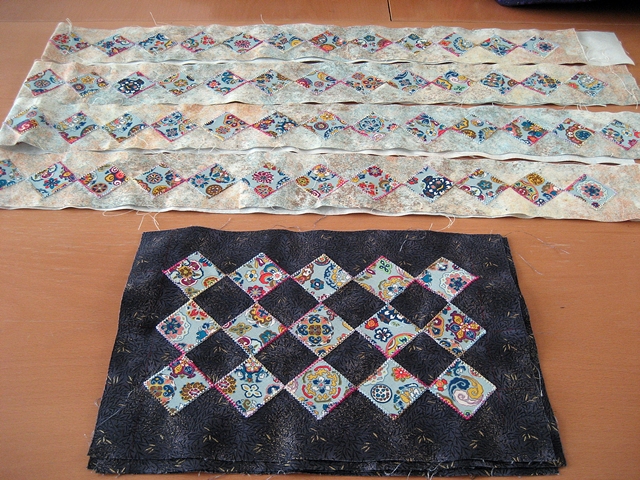 Have also made up the diamonds for in the next border. Not sure how it will look having my diamonds on both a light and a dark backgrond but its the only way I had enough of either of my fabrics. Know my diamonds are the right size and have placed them according to the quilt plan with plenty of extra fabric for trimming to match the applique panels which I hope Esther gives us tomorrow.

For Secret Garden I have made my 40 little blocks for part five and I just love them. 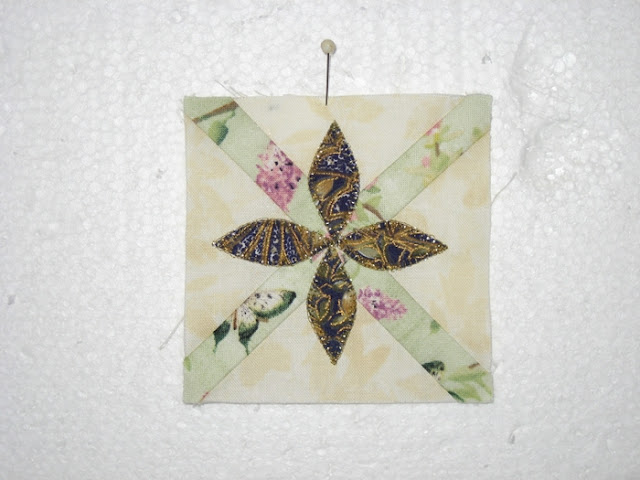 Was an easy calculation to get the 75% measurement of 3 inches for the finished size of my blocks but harder to get my cutting perfect. After a couple of test blocks this is my first one. Had been dying to start using my contrast fabric and it looks as lovely as I had hoped. Esther says we use nearly two meters of this fabric and I for one can't wait to see how we use more of our contrast fabric.
My leaf fabric a friend brought me back from Aust just before part 5 came out, it was the first fabric I thought of and it looks great, just wish I had heaps of it to use in other places but unfortunately I don't and what I have doesn't have a name on it or I would try to get more. 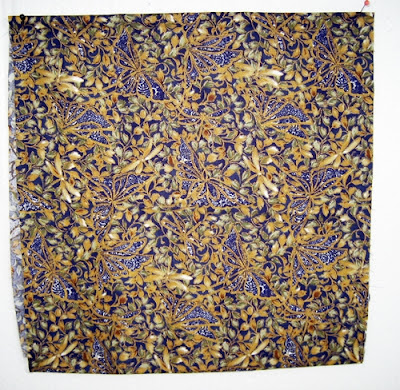 If you know what it is called could you please let me know.

With my blocks made just had to try them out and see how they look against a large block. 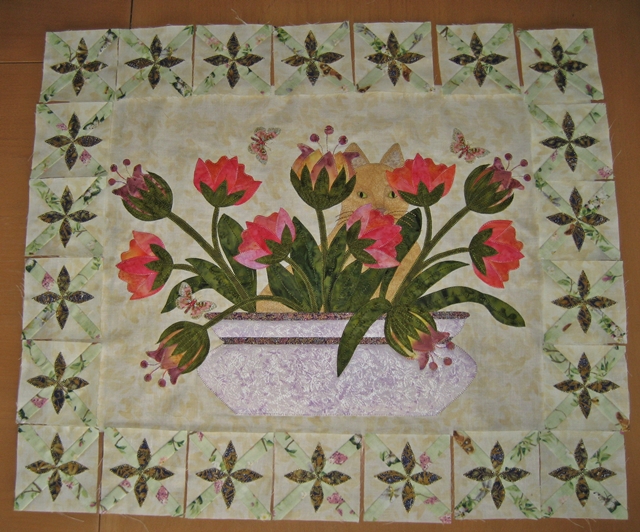 Know they aren't for surrounding these blocks as no where near enough of them but has let me see how the colours work together and I am thrilled. Haven't used dark blue anywhere else yet it seems so happy with my other colours. Now patiently waiting for 1st July and part six.

While staying with my friend in ChCh I came across a magazine is she is getting and was very taken by the quilt on the cover. 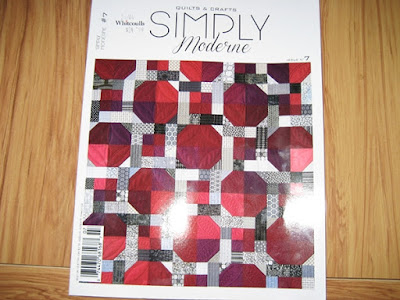 I'm not really a piecer but this pattern fascinated me and have always wanted to make a two colour quilt, especially using purple so the pattern just had to come home with me.
Was talking in about it at the Thursday group and saying I would need 5 purples and 18 assorted fat quarters of greys to make it, suddenly the counter was full of fabrics so now I have another project for when I want something to do. Have made 20 blocks so far of the 100 I need to make an 80" x 80" quilt, pattern called for 144 blocks finishing at 96" square.
It actually is a very simple pattern to make so long as you get the block colours in the right sequence, something I have yet to perfect!! 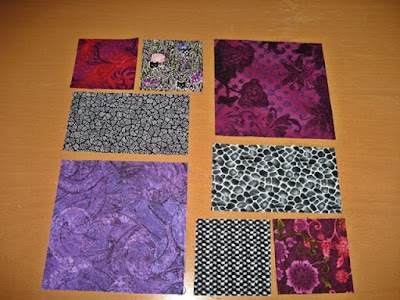 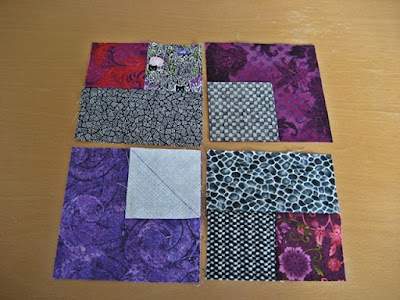 Add a square to each corner and stitch the diagonal 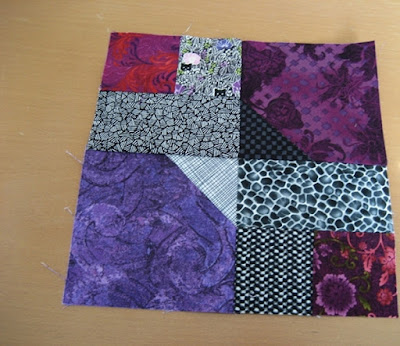 Sew the four blocks together 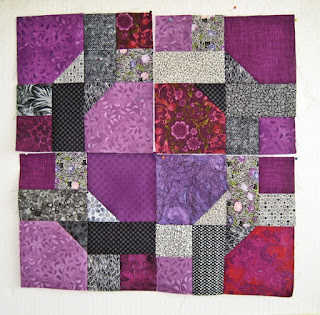 Four blocks together make up the pattern.

Am hoping the two fabrics with the touch of Pinky Orange give pop to the quilt when it is all together plus the grey fabric with a touch of lavender and little black cat faces is my hero of the greys so am trying to use it once in each block. It is wait and see until all the blocks are made to see if it works like I hope it will. No rush as this is my fill in project.

Back on my sewing table at the moment is Heart's Desire, another wonderful pattern of Esther's that back in 2011 was a mystery BOM and has been sitting for about eight months waitng for me to finish the quilting. With luv shack finished I was in the quilting mood and have made steady progress this last week, 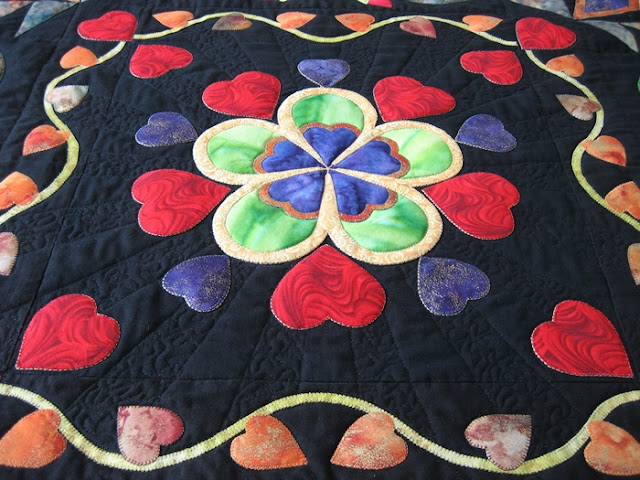 When I put it away last year I had stitched around all the applique and quilted the outermost border and the center. 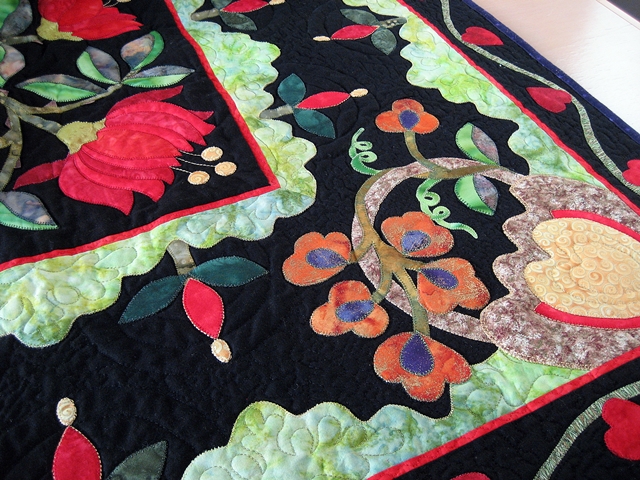 Three borders and corner baskets now completed though I want to do more stitching around my "candles" but am not sure what to do yet as want to create the look of rays of light similar to the center. 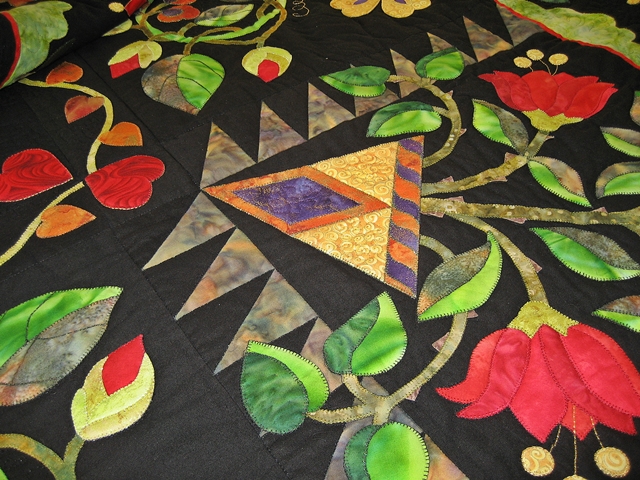 Hard to see but have stitched flower motifs in the triangles of the vases.
Have ditch stitched the sawtooth triangles with same metallic thread as on my leaves but undecided what to do with them next, think I will be googling for ideas.

Thats been my last few weeks of stitching so my diary is up to date again. Now to link with Esther's WOW and head back to the sewing room.