Hi Everyone, lovely to be able to blog again after nearly two weeks of no internet.
Amazing how you get so used to just clicking the mouse and being in touch with everyone, was an interesting couple of weeks but I did get lots done, including cleaning up the garden for winter.

I had just completed part 11 borders and attached them to my quilt top and was ready to upload this photo. 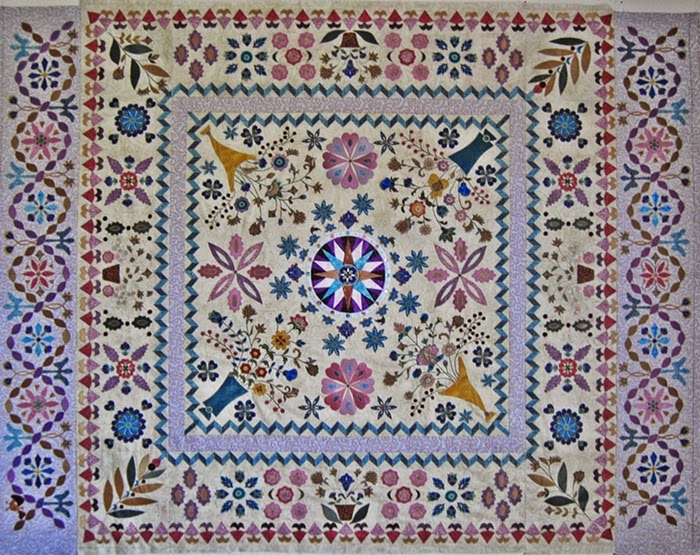 Loved making the part 11 borders. The oval braids I thought would be difficult but they were a real pleasure to both make and sew.
Because my border fabric has a textured surface I didn't draw placement lines for my braids, only marked major points and the placed the ovals by eye. There are several variations of curves along both these and my part 12 borders but I like this as it feels more free - if that is the right word.
Have tried to enhance a photo of my border fabric as I think the camera is being fooled by all the other fabrics and colors and showing this fabric as a lilac grey and it isn't!!

Not sure if you can really see the texture of this fabric. All the paisley pattern is a raised thread in a beige/brown, the background fabric is white and has a widthwise rib which has meant joining my borders and mitering corners for my part 11/12 borders to keep the flow same as in my narrow border.
The reverse of the fabric is beige showing white paisley. This fabric is 100% cotton and  in my mind only, could have almost come from the era of the original Love Entwined, if they made fabric like this then which I doubt.
Gee, I do love how my vase looks in this photo, LOL 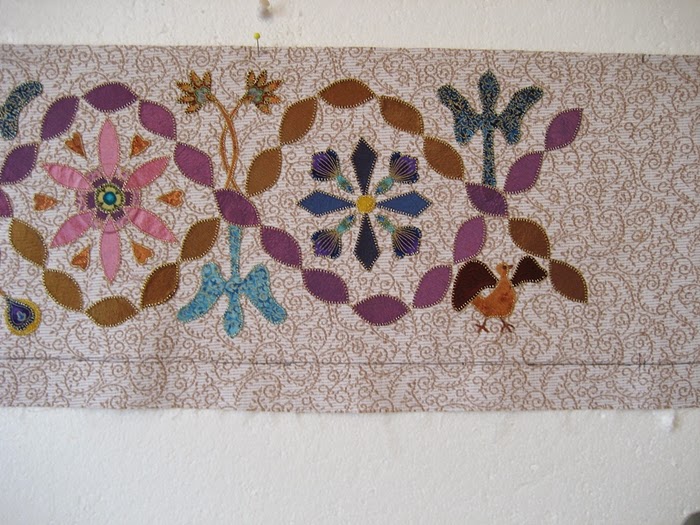 I did change my bird a little, did not like my gold wings as the bird seemed  insignificant, wings replaced with dark burgundy and now my bird takes it's proper place in the bottom border. 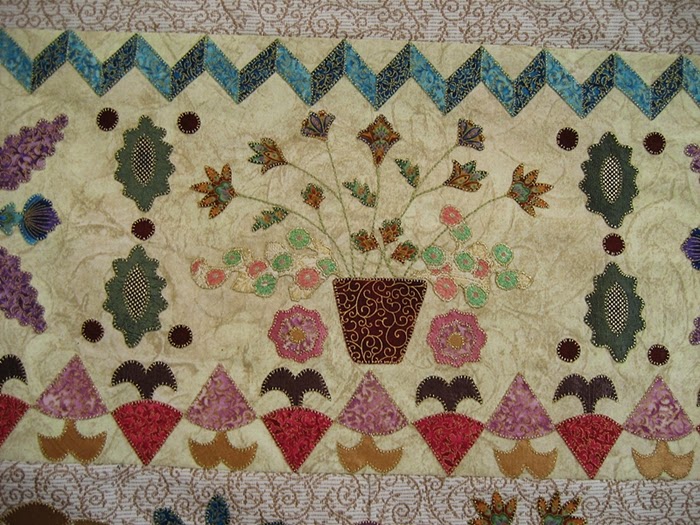 Another change. I felt my pastel flowers in my Kimono fabric were just too soft so I bit the bullet and took color pencils to them - after testing on an offcut -  am very happy with their slightly stronger tones.

Now to my part 12 border.
Being me I started early, I was up to date and knew I wanted my angels to be the same all around my border. I studied Esther's images in her intro notes but decided I wanted my dark angels inwards and my light angels out all around my border and my braids to match in the corners, so I used my part 11 pattern for this stage.

The first lucky charms were the perfect size for using  the medallion center of my compass and instead of the rose the flower from my center also worked a treat. I tried Esther's shamrocks in different colors but settled for hearts, from Esther's Lily Rose - perfect size and shape - and just seemed to add to the marriage theme.
The small stems were a problem with my background fabric, I had struggled to make my machine stitched stems in the first border center medallion strong enough so decided I would use fabric and a very narrow zig zag stitch on them. Same zigzag stitch around my small hearts.
Esther's little flower's for the second medallion were fine, I used my machine's eyelet stitch for the centers.

The Center medallion, easy choice, a touch of the dark blue from the other border and gold eyelet centers.
Another medallion center for these lucky charms worked fine but I tried many options for the shamrocks before LE told me to just stay with hearts.

Border complete the most exciting moment, stitching my border into place and mitreing my corners.
I used a variation of Esther's method for mitreing my corners - Esther has a tutorial on her blog.
With the bottom border laid flat I folded my top border under on the diagonal until it had the correct alignment then pressed into place and carefully pinned along the folded edge. Next I simply blanket stitched along the folded edge and then trimmed away my excess fabric at the back. 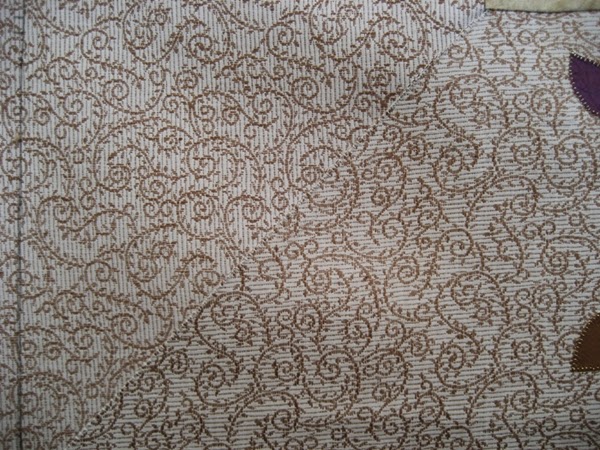 A nearly invisible seam which will almost completed covered by the willow tree next month. 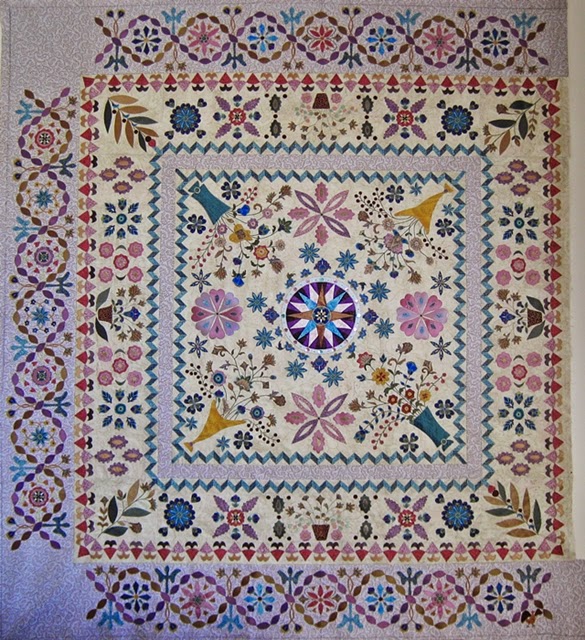 Back on my wall where I can view it all the time as I work on the next border.
I love how these borders have come together, Thanks so much Esther for giving us this wonderful pattern.
Linking now to Esther's WOW
Enjoy your week everyone, Jenny
Posted by Jenny at 08:44 9 comments: