Introducing Kelly and other things

Have had to stop sewing as have run out of thread for my Bamboo wallhanging.
Going shopping for more tomorrow, but thought this afternoon I would introduce you to Kelly, the totally pampered 3rd member of our family. 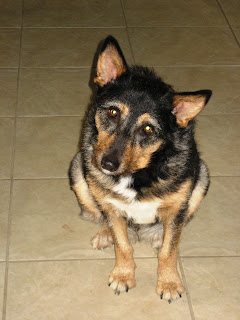 Everyone comments on what a lovely OLD dog she is, but she is only 7 this year and has had the grey hair from when we got her at 11 months old﻿.
The people who gave her to us swear her father is a border collie but  lying with her front paws crossed, which my girlfriend who has border collies says is a trait of the breed is the only sign we can see.
The rest of her is Kelpie /Beardie hence the grey hairs.
She was raised as a cattle dog but didn't make the grade.
When we went to see her it took 20 minutes with titbits to get her to come to  us, she was so timid.
When we brought her home she cowered at everything, but now she is the most loving dog you could ask for, with a massive bark for anyone she doesn't know!!!

This photo led  to my first attempt at working from a photo pattern and this is the result.
I would have liked more blurred edges in her coat but not sure even now how to do it. 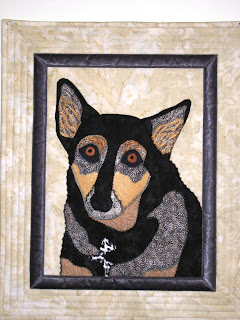 This led to my second attempt at an applique design from a photograph.
A young girl competing in floor gymnastics that featured in our local newspaper.
Steve cut it out and said here is a challenge for you. 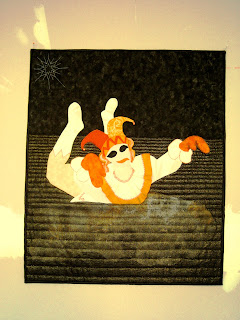 ﻿The flooring was my first use of my Back/Gold mesh overlay, the shadowing fabric was placed under it and it is the bronze cobblestone look fabric used in my table runner.
Steve helped me with the 3D aspect and I went back to dressmaking for her collar, it is gathered at the neck and sits free, only stitched under at the floor.
Likewise her hair is embroidery cottons that are caught only where they sit under fabric. 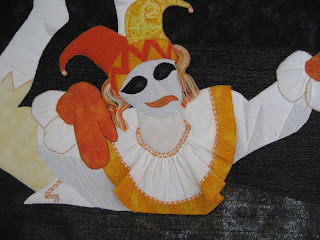 This hanging swaps in name between
The Jester - and  - A Star is Born
Posted by Jenny at 13:56

Email ThisBlogThis!Share to TwitterShare to FacebookShare to Pinterest
Labels: dogs