Hi Everyone,
Have had a good couple of weeks but ran out of time to post last week as got carried away with Hexit after going to group on the Tuesday where fantastic progress was made by the teams of ladies. 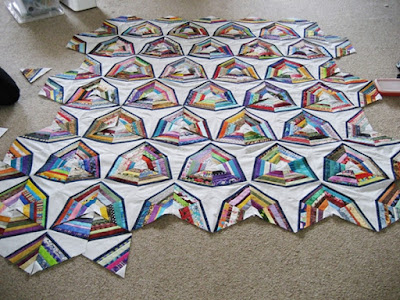 Laid out on the floor all the hexagons are made and most of the rows sewn together. Only on problem, I had stitched my side pieces along the wrong edges so they wouldn't match and had to be unpicked. And I took so long making sure they were correct. Lol
With the rows completed it was dropped back to me so I could add the side sections and also the final row of diamonds. 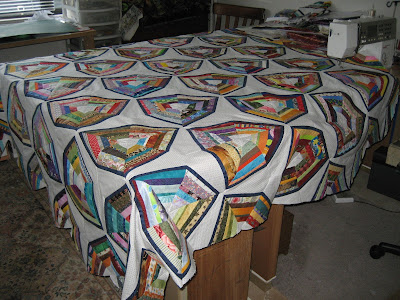 Hexit has grown into a rather large quilt as you can see from the photo.

Before this of course part two of Flowers Bloom was released and I had great fun with this block after a couple of false starts as thought I would use more of the vegetable fabrics for my leaves, when that didn't work I tried another leaf material I had. 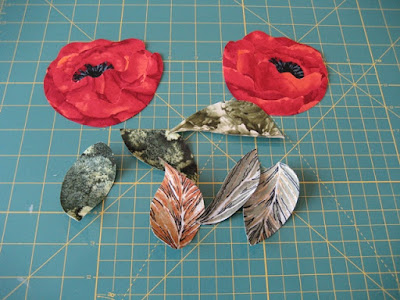 Also had a poppy fabric that I thought would work so made a couple of flowers out of that but they still looked like poppies and the colour didn't gel with my first block so tried my next fabric. 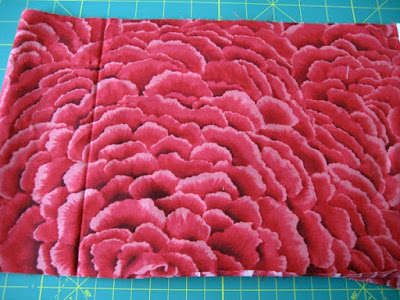 Took a wee while to sus how I had to place my fusible to get the petals to work. 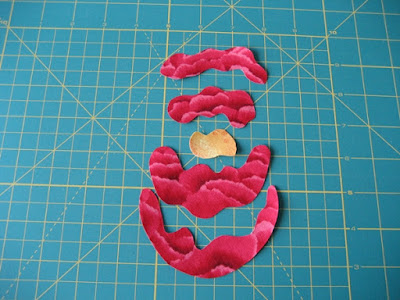 laid out can see it will work. 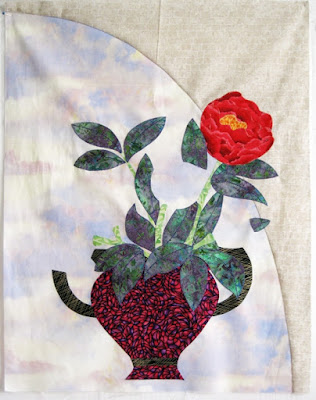 Went back to a batik for my leaves, a green purple mix and a light green/yellow for the stems 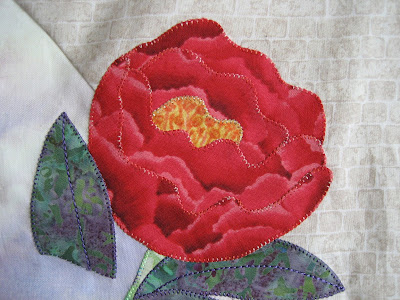 The center is from a fabric with oranges on it so decided to use pens to add to the round blotches it already had. Stitched with variegated thread which really highlights the shape. 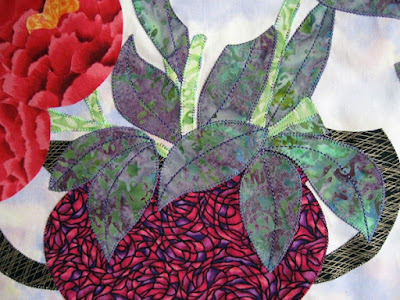 For the leaves I used  a deep purple thread to bring out the purple in the fabric.
Apale variegated with touches of mauve on the stems. 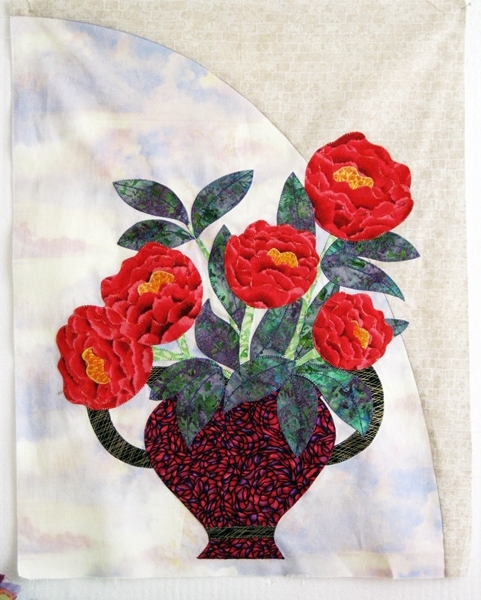 All done and happy with my final choices 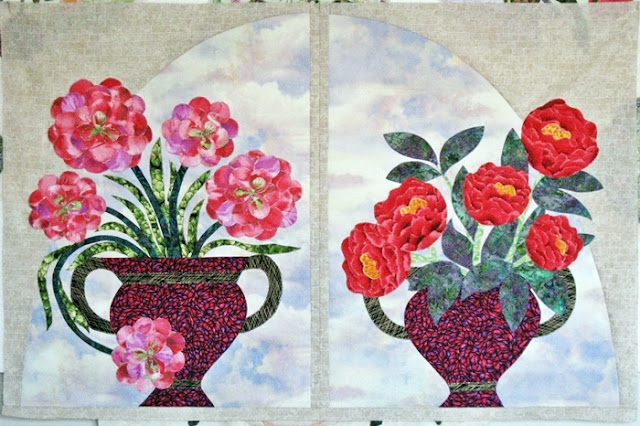 Had one little hiccup putting my blocks together as when I added the bottom sash my second vase was set an eighth inch to high. Not a lot but you just see a line of sky between the vase and the sash so unpicked the bottom of the vase  up to the band and trim it away then slip a new base under the band and restitch.
Then it was back to Red Delicious. Rose Delicious was my next block, had no set fabrics in mind but selected deeper tones for the leaves and stems. 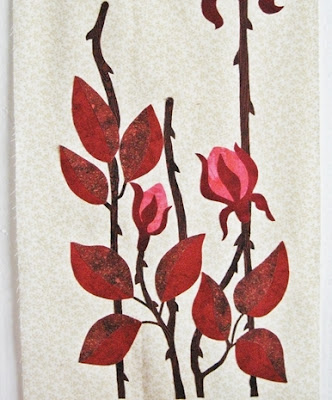 Liked the fabrics but was a little concerned there was not enough variation. Buds were easy as only needed one fabric a deep mottled batik. Knew I would stitch the leaves with a contrast thread  so carried on making my flowers. 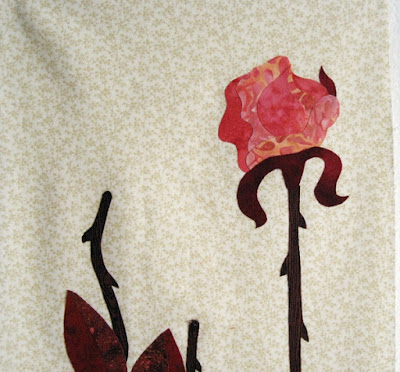 Needed some contrast so used a pink/yellow batik and a deeper pink as well. 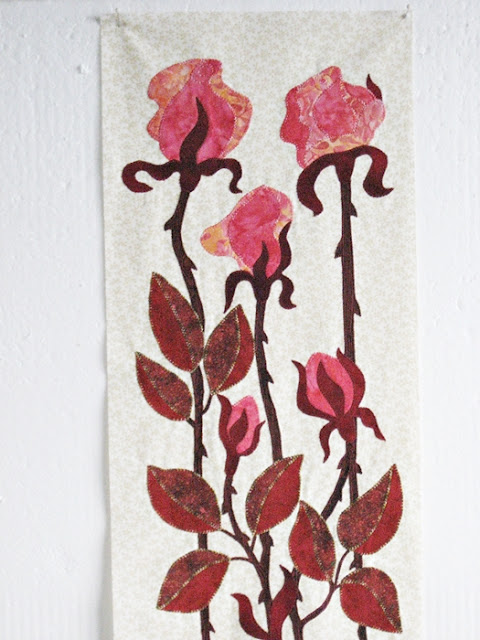 More variegated thread and the leaves have popped along with the flowers.

Dark sashings are the making of these blocks  and with the swirly in place as well I love how Rose Delicious is looking.
Next up, Fanfare. Spent a few days just thinking about this one. I wanted an oriental look  but nothing in my oriental scraps that would work and I couldn't find enough different reds that I was happy with, the pattern used seven but I came up short at five so decided to take a risk and use only two for the blades of the fan and another for the sides. 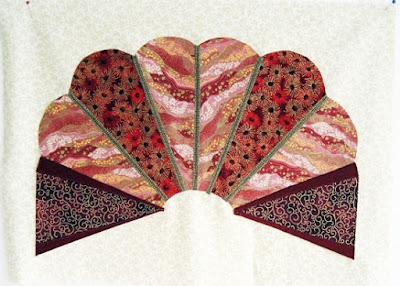 Some might remember the mini eggs in Esther's easter pattern, same material here, positioned so that I got angles rather than straight lines.Edges for the sides are satin ribbon as per the pattern. the braid was interesting as I cut narrow strips of a mottled gold fabric and edges them with blanket stitch in a gold mettalic and they just sat there and looked back at me. Not what I wanted at all !! 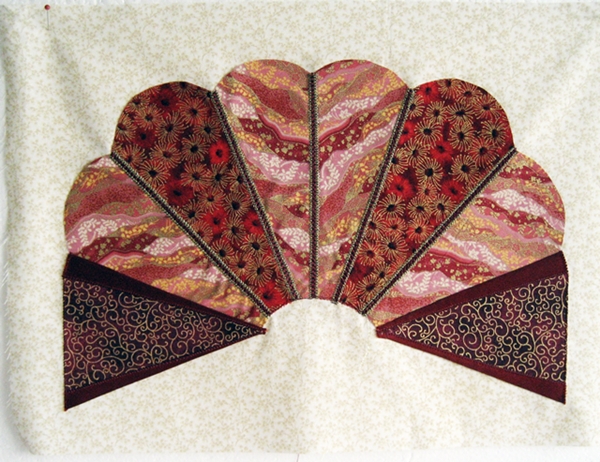 Used a dark burgundy thread and a stitch that does about 7 stitches very very close together before moving forward and stitched two rows in the center of my braid and it worked,  so went ahead and added bthe same to the sides. 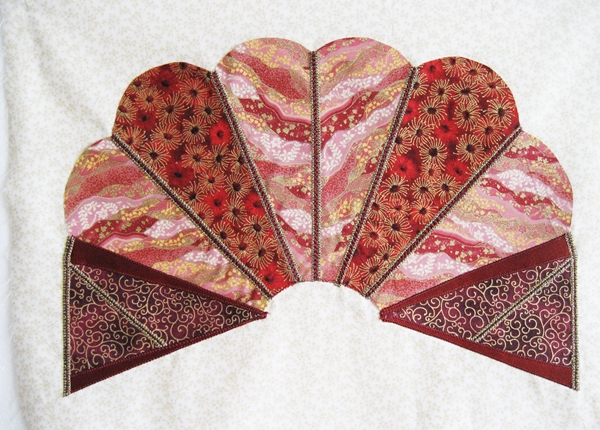 happy and time for the center 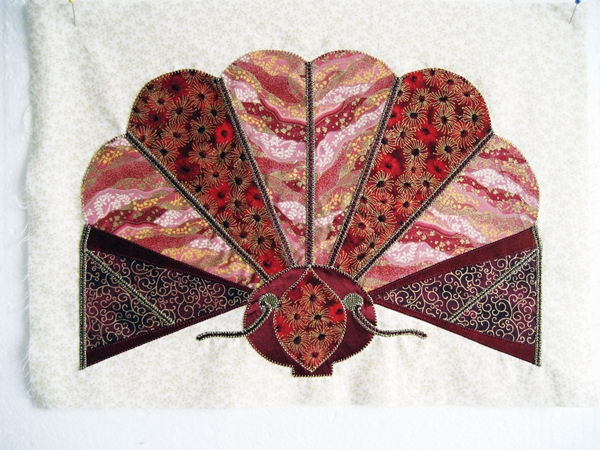 Burgundy center is a synthetic satin and the little circles are the fabric I used for the base of my braid.
left the tassels as I didn't want to just stitch lines on the fabric so had to experiment to create little 3D ones. 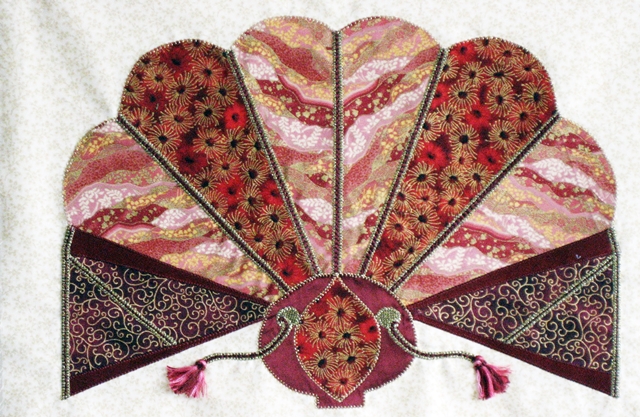 Didn't take any photo's as wasn't expecting them to look any good but here is what I did.
Used about 12 strands of embroidery thread mostly burgundy with a few of two pink shades. Miles longer than I needed as tassels are only about an inch long. Doubled them over the bar of a safety pin to get the folds flat than added a strand of the dark burgundy through the fold alongside the pin, knotted that thread leaving long tails.Machine stitched across the threads several times below the knot to secure them together. trimmed them down to a bit longer than needed, teased out the strands then trimmed to size. Threaded the tails and took them to the back then brought them up again one each side of the tassel and crossed them over and back down on the other side and secured them to create the band and secure the tassel. 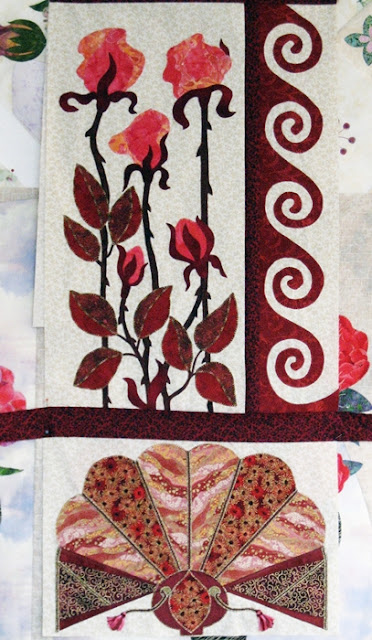 Just pinned in place at the moment as sashing goes across two blocks.

My design wall is in good use, under these blocks are my windows blocks and under those is Secret Garden.
If you have read this far you will know I am loving making these blocks for RD, Hope you are enjoying my journey with this fun pattern, it is avail on Esther's website if any of you are tempted to make it.
Linking to Esther's blog then making a start on the Cherry Thieves block.
Enjoy your week  whatever you are doing.
Cheers Jenny